skip to main | skip to sidebar

You're not seeing things... 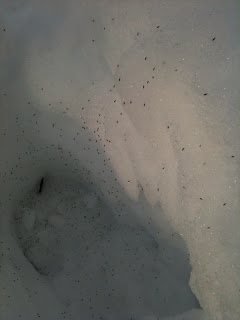 Yesterday, my husband and I decided to take our puppy on a hike despite the fact that we knew the trails would be covered in the recent snow fall. We had a couple lazy days so we were feeling up for a challenge...and felt like we needed some fresh air. We headed out to a local reservation, Campgaw Mountain, and started down the 2.5 mile path.
It was quite beautiful. It was exactly what we and especially Oakley - needed. Except for a few birds, nothing was stirring. We usually see deer on this particular path...but there was nothing. The snow was heavy and as we stepped in the footprints of many hikers before us, I started to notice something WAS stirring. More than just my boots filled these footprints and I decided to take a moment to see what was going on in the many feet of snow beneath me. At first I thought I was seeing things... there were little specs inside each and every footprint. When I took a closer look - I realized, they were jumping. Yes. Jumping. As a person in the pest control industry, my mind began to race. But I came up short. In the dead of winter - in all the snow...the ground seemed to be teaming with these black jumping specs. The only insect I knew that looked and acted like these were fleas. I was immediately very concerned...especially as I watched Oakley run and put his paws right in the middle of these jumping insects....over and over again. I was nervous that our afternoon hike was going to turn our car and our home into a flea fest.
We rushed out of the woods as fast as we could...which was about and hour and a half later and immediately we did a google search. As it turns out - they WERE fleas...but not the typical ones that you protect your pets from... they're called (very appropriately) snow fleas.
Here's what I learned about these pesky snow fleas...as it turns out - they aren't pesky at all.

Snow fleas are actually tiny insects which come out on warm, sunny days to eat decayed plant material or sap oozing from the tree. They hop around acting like fleas and that's where they get their name, snow "fleas." They're not fleas though, but actually an arthropod called Collembola (kol-LEM-bo-la) or commonly called springtails which measure about 1/8 inch (2mm) long. They have a very unique catapult system to get around. Two "tails" on their back end are tucked up underneath their belly, held in place by tiny "hooks." When the springtail wants to move, they just release the spring-loaded "tails," called furcula, which hit the snow and send them flying into the air. Since snow fleas can't conrol their flight or direction, they frequently land in the same spot or only a few inches away.

These are not just winter critters. You can find them any time of year in the forest living in the leaf litter stuck to the underside of leaves or on the surface of the soil, chomping on bits of rotting vegetation. They also live on the surface of ponds. You'd have to look very closely to see them here because they blend in well and are so tiny.

Horizon
Horizon Pest Control is a family-owned and operated New Jersey pest control business with nearly 40 years of dedication to serving its clients. In 1970 Bernard N. Holst Jr. founded Horizon in Midland Park, New Jersey and laid the foundation for service excellence at Horizon, “Let our family take care of your family.” This simple concept is what truly sets Horizon apart from its competition: We treat every home and every business as if it were our own. Horizon remains successful because of its continued dedication to the Horizon family…its family, its employees, its clients and its community.